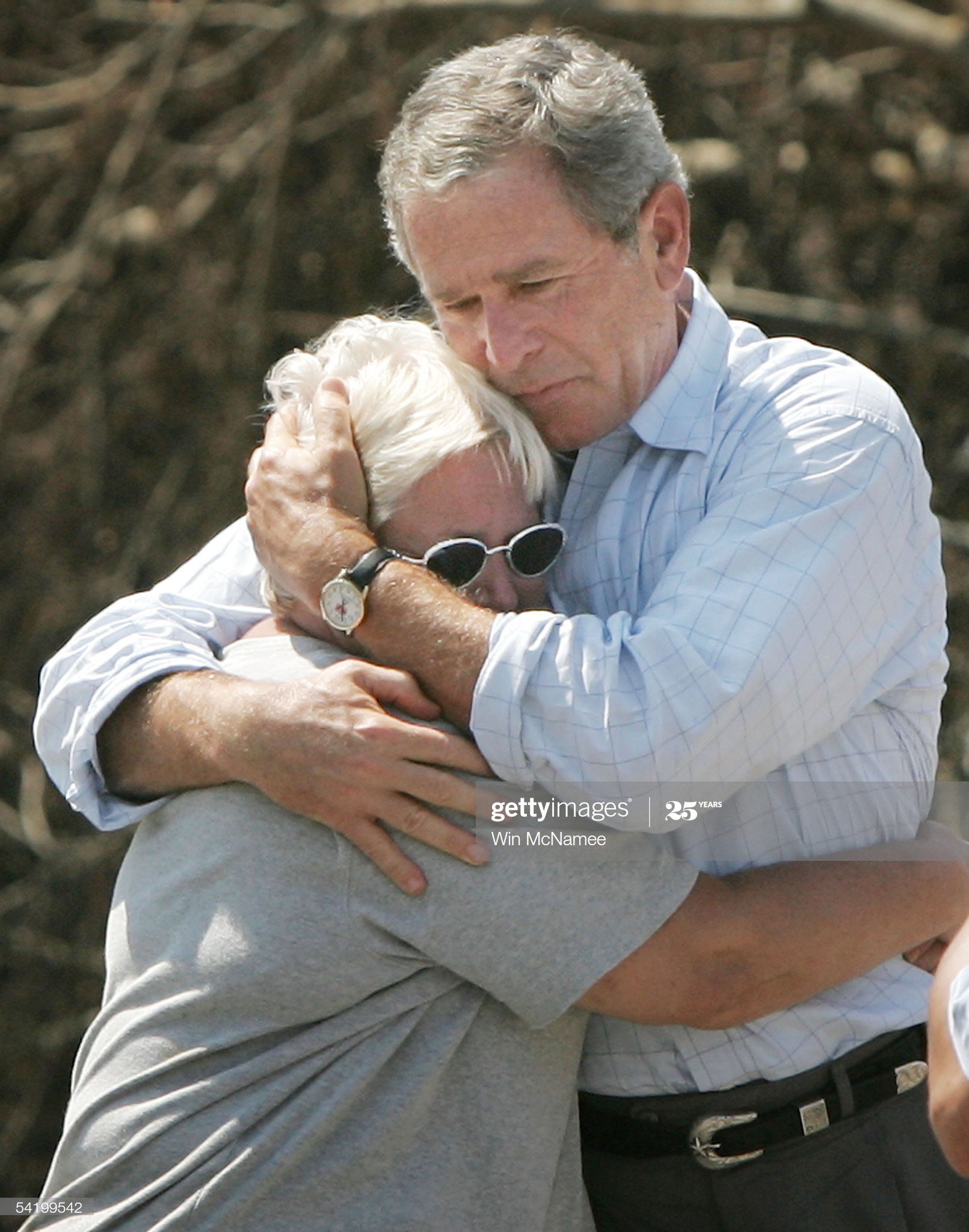 “Brownie, you’re doing a heck of a job.”

George W. Bush was on the ground in the gulf coast region struck by Hurricane Katrina in 2005 and his christening remark toward then-Federal Emergency Management Administration Director Michael Brown became a stigma on Bush as FEMA and Brown specifically, was criticized for their handling of the situation. That’s the political memory from Katrina that stands out, “Heck of a job, Brownie.”

Yet here in 2020, with the coronavirus unleashing hell on these United States and the world over, the focus on George W. Bush’s albatross changes for me. The 43rd President was on the frontline of hardships and witnessing things for himself. That Brown remark was an attempt at a morale boost (that ultimately failed; Brown resigned). Bush was involved.

Go further back to the attacks of 9/11. While a critic or a comedian (I was the former; I oft try to be the latter) focuses on Bush’s facial expression as he was told by an advisor that the nation was under attack, one of the more powerful images that were taken was of Bush on Air Force One, seeing the destruction upon Manhattan Island and the city of Nee York. Dubya would be on the ground time and time again in the days and weeks that followed. It was a first-hand experience in a city in recovery. That may or may not have influenced domestic choices and actions. Wall Street ane business relations also likely have influenced those visits hut that’s the cynic in me talking.

My point can likely be elaborated for Bush as well as added to with other Presidential direct-involvement with people and places who were suffering. These experiences also lead to changes or actions taken by the government to aid those in need in one fashion or another.

In short, they led.

Criticize an action, choice, or ideological differences, but Presidents – Barack Obama, Bush, Bill Clinton, George H. W. Bush, Ronald Reagan, and so on. – led, They learned first-hand as they socialized with the ailing, the stricken, the grieving, the mourning, the survivors. They took part in life and reacted with the voice and powers they controlled.

Have you seen that from Donald Trump in this situation or those prior? The man who demands the United States resume normal business and social operations in full by Easter is more renowned for spending time at his own resort facilities than visiting hospitals or speaking directly with doctors and nurses on the front-lines.

Donald Trump has a reputation of locking-in on a conclusion no matter what Pair this with the social-disconnect toward general Americans that he seems to flaunt all-too-often in his remarks and actions, then mix it with the intelligent perception that a President shouldn’t be put in a risky position. That’s not just a recipe for disaster, it’s been in the oven and baking the past three years!

“My way alone” is not leadership, not is concluding facts from you4 limited perspective.

This is a disaster that’s putting the United States collectively in disarray and turmoil and leadership is absent. The figure who is supposed to embody the role of leader turned away from the role as he was warned about such a threat. The threat Donald Trump focused squarely on at the times COVID-19 warning was told to him, was keeping the role of President.

Impeachment and self-esteem/self-image was more important than responsibility. This has played out over and over and over again. People are dying and it’s partly because of that me-first mentality.

Americans are dying, and the United States is operating in a twisted fashion or r like a chicken with its head cut off, take your pick. There is no leadership, there is a man in charge who demands loyalty and denies as much to the nation he is supposed to guide. His social concerns lay with the financial elite, not with Joe or Jane Average.

For the record, Trump was on the ground in Puerto Rico after Hurricane Maria ravaged the island. He made his own “heck or a job, Brownie” statement through the action of tossing paper towels to citizens of the would-be 51st state.

Ambivalent by Fowler’s Bluff (with lyrics)

This song was released in 2013 by the indie progressive tock group Fowler’s Bluff, though I first discovered ut about a year ago. That’s local music for you…

I’m happy to see the Tampa Bay Times has resurrected its old articles from its days at sptimes.com… That enables access to the past of online content in the history of %ampa Bay like news features in sports, such as the March 2005 feature by former Times writer Tom Jones.

2005 was par5 5wo or the roiled 2004-05 NHL season. While some players stayed idle an waited for labor resolution between the NHL and NHL Players Association, others went abroad to continue their play in the sport, such as Vincent Lecavelier of Tampa Bay Lightning fame.

I’m also happy to see my Boltsmag write-up about the piece is still alive in the Raw Charge archives. Below is my quoted piece with updated links where needed. I do encourage NHL fans to check out the piece of NHL history by Tom Jones. The following write-up was my personal introduction to the piece.

Life with the White Bear,
by John Fontana

I’ve sometimes wondered if me and Vincent Lecavalier woudl ever meet somewhere or somehow cross paths in life. He’s only a few months younger than I am and when he was drafted and the big hoopla was made about him, I had this premonition that Vinny and I could be friends, could get along, could hang out.

And yet with each day, every season, every interview that I’ve read (not many, because Tampa Bay is not Montréal or Toronto) that link… that kinship that I felt disappeared. Vincent is a big name star, he’s got it all and he’s got confidence… He dates models and he’s an icon in Canada.

And today in the St. Petersburg Times, that link was renewed… That sort of hopeful understanding.

Tom Jones traveled to Kazan and spent time with Vinny. This is all chronicled in a piece called Rough Translation and some of the things that Vincent has gone through in Ak Bars Kazan have made me feel… Well, like someone would understand some of the crap I go through daily being hard of hearing. That lack-of-understanding and such.

But to get off my personal points, this article by Jones chronicles some of the adversity that Vincent has faced in Kazan and how he’s kept a positive attitude. How trying it can be to understand his coach’s rants (Zinetula Bilyaletdinov speaks English but addresses his team in Russian), how not understanding what someone says makes you want to shrink away because you don’t know the translation, and the difficulty just to order a bowl of Oatmeal in Kazan.

And if you are interested in seeing the photos associated with the article (and there are a few), please check out this link.

I was listening to Broadcast Network for indie Artists yesterday, specifically their Las Vegas stream, and this song from 2009 came on. I looked it up on media sites and it had only 2 to 3plays depending on where you looked (a respective 5,427 on Spotify – the top popular song).

I like the arrangement; it has a great tone and feels like a song you would hear late at nights in 6he 1980s.

I do consider it Adult Contemporary stock. Give Chuck Eaton’s song, “Woman”. Tell me what you think in comments.

Here are the lyrics to the son.

[Meta] This blog isn’t all about the Bolts

I round out that every single category of his web site was listed as “Tampa Bay Lightning” in search engine results. One setting or another related the mistake.

I wouldn’t think any repeat visitors saw 5he issue. I still feel the need to apologize; it’s a big s red up an embarrassing to have happened.

John Fontana March 9, 2020 meta JohnnyFonts.com Comments Off on [Meta] This blog isn’t all about the Bolts
C'mon.. Follow me. Like me.