Tariffs are on the scene in many ways and that is being discussed in many places — factual reports and opinion pieces and such. The world is affected, United States product costs are affected. Farming is affected. The Trump administration continues the plan, with the remedy being everything will be internally produced… or so it seems.

All of this made me think of the pop culture classic comedy film “Ferris Bueller’s Day Off”. One scene, one class, it shows how society reacts to learning about tariff effects on society and states clearly the historical relevance of tariffs on the United States economy. END_OF_DOCUMENT_TOKEN_TO_BE_REPLACED

Speaking of My Faith

I’m not comfortable talking about my faith and personal ties to religion but here’s back story on…me. It’s where I stand and what I believe and in some ways, how I came to it. END_OF_DOCUMENT_TOKEN_TO_BE_REPLACED

John Fontana July 29, 2018 Personal Comments Off on Speaking of My Faith

This is a touchy subject — the handicap parking shooting in Clearwater, Florida. “Touchy” as I’ve seen the reaction that there was no crime, it was simple self-defense. I’ve also seen those who declare it murder.

None the less, there’s a charity fundraiser to raise funds for those affected by the loss of Markeis Mcglockton. Click the title to go to the GoFundMe page.

Lost articles may be found again via the Wayback Machine

With how articles sometimes disappear — you have the link but error messages pop up when you click on them – – you need to be aware that you might be able to access the story/article/page still. The Wayback Machine on Archive.org sometimes has previous versions of web pages that were published.

Part of the reason I bring this up is because of the Tampa Bay Times archive death. I know from web searches that sometimes articles from sptimes.com can still be found on Google search. If you right-click on the link, choose to copy the link, and then go to web.archive.org. Past that link in the URL field on the site and it will (or won’t) have a mass of versions of the site/page.

It may just be a novelty to some, but the Wayback Machine is a very welcome avenue for those doing research.

Radio Airplay: A review of Jango’s backend service after 2 years use promoting music

If you’re an indie musical artist or even one under a label and looking for exposure, you may see Radio Airplay, which powers the Jango music streaming service, as an option. Indeed, it is an option to get heard around the world by music listeners who listen to stations aligned with specific performing artists that you align your own music with.

Is the current goal of the Tampa Bay Times to simply one-up Creative Loafing and not to actually be a news organization that reports on the Tampa Bay metro area the state of Florida, and the United States? Maybe the print version is more news-traditiona., but the online site and its top-story headlines (on TampaBay.com or TBO.com) are anything but.

Wednesday, July 18th screenshots of the two news portals give you a glance at just what is taking priority: 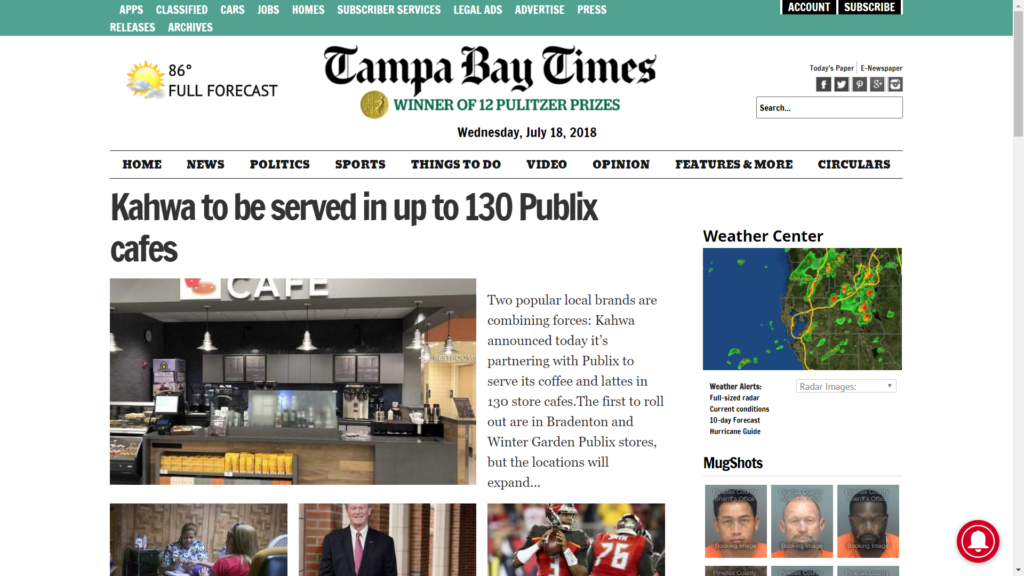 Call me biased, call me small-minded perhaps, but with so much happening in the world, so many items of substance that affect people, so many events of negative and positive in the day to day life within the Tampa Bay metro region, how the living hell is a sales item at Publix a priority for reporting??  Since when is an amateur food tour relevant on a mid-week day in the region?

I hate to bring him up, but the President’s oft-used descriptive phrase is most fitting here: Fake news. What is being prioritized hee is closer to a distractive measure than actual relevant information.

While I cited Creative Loafing earlier in this piece, I’m not trying to fault the organization that offers a free weekly print paper. It’s casual, it’s leisurely. That’s what it has always been there for and built up its reputation through. The Tampa Bay Times originally sought to counter it with tbt*.  To do it with the main page headlines and top stories on two news portals though? To brush off informing local citizens about events, incidents and politics in the region, state and the world around them? Instead to put priority on day-to-day personal life and casual antics? That’s a huge, huge step down from the respectable news organization the Times used to be. 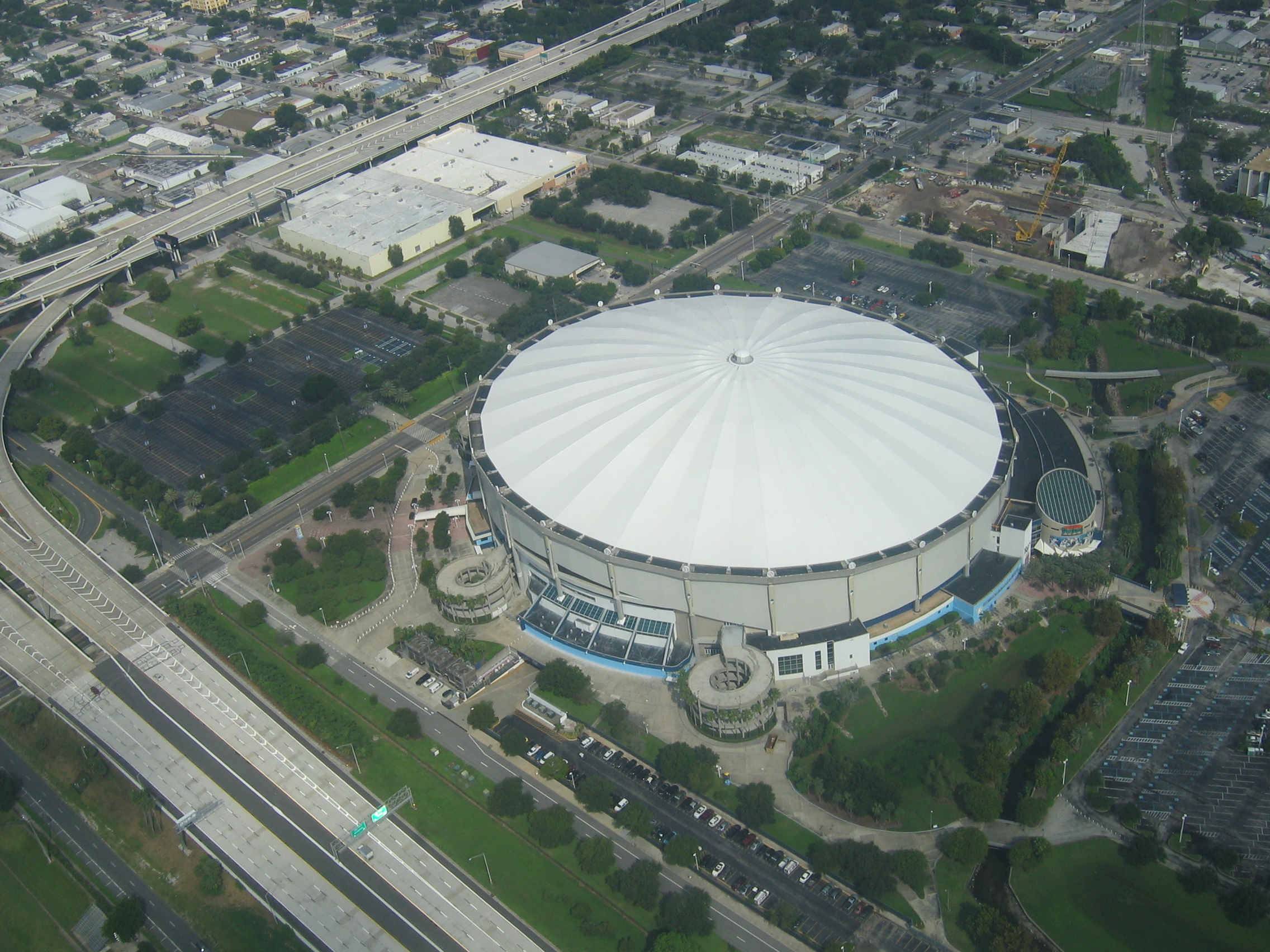 Regionalism versus myopia: The resumption of Hatfields versus McCoy in Tampa Bay sports

More than a year ago, I wrote about the issue with St. Petersburg and the Rays. The city’s logistical location at the southern tip of Pinellas County is a rather isolated locale for the greater Tampa Bay metro region. Of course, for residents of St. Petersburg, the issue is simply because Tampa gets the unfair advantage, it’s the difficult place of the region to travel to and … and… and…

And I’m hearing too much of this Hatfields vs. McCoy’s bullshit once again. A myopic mentality has come to light once again after the Rays unveiled their new stadium proposal in the Ybor City area of Tampa.

Remarking about the proposal before getting back to the topic of this blog post: An $892 million stadium, only seating between 28,000 and 30,000 was proposed with a translucent roof structure so natural grass can be used in an indoor ballpark. A very-much excessively priced structure with an experimental asset? If you’re a resident of Tampa, St. Petersburg, elsewhere in the region, or even in Montréal for that matter, you should take issue with this. This is Jeffrey Loria-like tactics being employed by Stuart Sternberg. Oh, there is something fitting here, that a small park in Ybor City would mix with the neighborhood a-la Wrigley Field in Chicago.

This isn’t a neighborhood baseball club though. This franchise is supposed to represent the Tampa Bay Metropolitan region. That stadium plan fails unless you’re going to utilize the We must or else! strategy that St. Pete utilized in the 1980s and resulted in the construction of the domed venue now known as Tropicana Field. END_OF_DOCUMENT_TOKEN_TO_BE_REPLACED

Rumors, innuendo, speculation… It’s loomed since before the 2018 NHL trade deadline and now it’s on the forefront during the NHL offseason. Days after the start of the free agency season, Ottawa Senators defenseman Erik Karlsson’s name started making headlines again. Karlsson is available on a revamping Senators franchise that is also a marred object by way of owner Eugene Melnyk. (Sinuate: Senators fans – We’re expansion brethren and I sympathize with you over ownership issues; the Tampa Bay Lightning have been there, believe me).

That little statement there dropped the bomb on which franchise this post is about: Les Bolts de Tampa Bay are tied rampantly in speculation at the end of the first week of July. In fact, yesterday (July 6) you could have come to the conclusion the deal was final and done and just had to be announced with details fully disclosed. That’s how much chatter was on Twitter and other means. A third party franchise (or many?) was supposed to be involved in order to manage contracts and move bodies to get things squared away all right and good.

You wouldn’t know this if you checked some of the Lightning blogosphere. END_OF_DOCUMENT_TOKEN_TO_BE_REPLACED

The art of the movie character cameo

The subject of cross-movie cameos has been on my mind for a few weeks… actually it pops up often and I bring it up with friends and they don’t usually cite much nor have anything in mind on the topic outright.

It piques my interest and amuses me when it happens though: A character from a movie shows up at random in another film. It’s just a passing moment for people who don’t know or who haven’t seen many movies. It’s a laugh or amusing for others who know movies and cinema.