The St. Petersburg Times took local area governments to task on their requests for economic stimulus project funds. Most of them were low key, beautification projects that would neither create jobs nor serve a purpose.

I want to know if the TECO Line Streetcar is on this list of projects. I don’t mean the quarter-of-a-mile extension. I mean funding to complete this sucker so it runs through downtown to the north.

Seriously, Tampa doesn’t seriously link it’s new residential units in the Channelside district to central downtown. it hasn’t linked it’s new downtown condos with the entertainment district to the east. How do you do that, stimulate foot traffic in all markets AND potentially stimulate the retail sector? Extend that street car.

That or you can try to get a windfall of cash to do ornate bullshit that shows no vision, no ingenuity, and no long term planning. That’s the usual in Florida…

The high for December 24th

81 degrees in Pinellas County, Florida on Christmas Eve. There are millions of Americans that have endured the cold of the late fall and the first few days of Winter with sub-freezing temperatures, snow, ice, and all the weather that marks the season (and the problems they cause).

I get eighty-one degrees… And I’m not in the seasonal mood one bit because of it.

I don’t mean to play the Grinch, or make those up north jealous and play out like I’m ungrateful for having temperate weather as we pass the winter solstice… But I don’t get into the seasonal spirit any more seeing green trees around me (where trees won’t finish shedding leaves until February/March and grow them right back again). In fact it makes Christmas displays feel like Las Vegas light shows instead of the true time of the holiday that I know. It’s easier to tell the season by looking at store displays than with the weather outside.

In Florida you get two seasons: Spring and Summer. Oh, it gets chilly once in a while but every Spring has it’s cold days. And while some may want to defend the fact that it’s winter right now, even in Florida, I must ask how many places consider winter a growing season? In the northern hemisphere, I mean…

Eighty-one degrees… On Christmas eve. I’m sitting here with the grass-is-greener-on-the-other-side-of-the-fence mentality. 20 years ago I was jealous of my father being in Florida while we froze our buns off in New York. Right now, I’d rather endure the seasonal shift to cold — because not only would it ring in the time of year better, but it’d make me more appreciative of the warmth of summer. It’s hard to do that when your average temperature is 90 degrees with a sixty percent humidity for most of the year.

Maybe the new year will afford me the chance to escape Tampa Bay. I’d take it, but I don’t think that’s in the cards.

So this is what it's like running the local blogroll…

Almost a year ago, Tommy over at Sticks of Fire and Brett Glisson worked out a deal where Tommy…Â  well, he bought / took over Brett’s brainchild TampaBLAB.Â  For the uninformed, uninititated or the plain flat out uncurious (helloooo Bush family!)Â  the TampaBLAB is an aggregator / blog reader.Â  It shares new posts from blogs in the greater Tampa Bay metropolitan area.

It sounds really complex but really, it’s not.Â Â  It’s simply like this:Â  You have a blog, most (if not all) blogs provide feeds — ways to syndicate or share their content with other web sites.Â  If you’re aÂ  blogger living in the Tampa Bay area and you wanna’ share your blog with the rest of the Tampa Bay blogosphere, you submit it to TampaBLAB and lo and behold — every new post you write gets published at the BLAB (not in it’s entirety, mind you, just a lead in).

Of course, someone has to be in charge of the BLAB (acronym for Bay Local Area Bloggers).Â  Tommy didn’t have the time to update the theme and add newly submitted blogs, nor maintain the main blog page on the BLAB.Â  That’s where I’ve come in…Â  Running the day to day and keeping an eye on things…Â  Dropping defunct blogs that haven’t updated in a long while…Â  Adding newly submitted sites.Â  Occasionally posting on the BLAB Blog and fixing technical SNAFU’s that show up from time to time.

…Well, more often than not with thanks to the number of upgrades WordPress has gone through in the last few months and compatibility issues that arise because of it.Â  But that’s techno-jargon you could do without.

So it’s been good so far, a little slow. Know someone who blogs in Tampa Bay and wants more readers? Suggest they submit their site to the BLAB. Brand spanking new blogs with no posts need not apply, though… Sorry. Blogs come and go so quickly that we can’t accept the newest of new kids on the blogging block.

Also, I’m trying to figure out if I should make the Skyway theme that’s employed at the BLAB available to the general WordPress-blogging public for download. It’s cute but not cutting edge, you know?

A Day in the Life at the Tampa Tribune

Copy Editor: “RUMORS OF OUR DEMISE HAVE BEEN GREATLY EXAGGERATED“; bold faced and centered across the front page. Print it.

Janet Coats: What are you doing?

CE: Refuting the rumors that are going around that the newspaper will be ceasing publication in the coming weeks. It’s really heinous stuff and we have to re-assure readership with…

JC: You can’t print that headline.

CE: Well, no, I guess we can’t now that I look at it. It’s kind of long… We could, well, you know, find another phrase to use…

JC: No, you can’t print a headline like that — in bold — at all. Ink isn’t on sale this quarter and stockholders are upset as is that Mother Corporate‘s share price is down. You need to pare down that statement to the bare bones.

JC: Look, “exaggerated” is too big a word to stick in there. No one who still reads a print edition of a newspaper will understand it… That’s got to go.

JC: And then pare down the most common words you are using: of, our, have… They have no relevance in this age of buzz words. Change the typed out version of the word “are” to “R”… See, it’s looking fine. Now nix the -ly on greatly and we can save all of another penny on ink! This will so please everyone back in Richmond!

JC: Just LOOK! It’s a bold statement in itself without actually being bold! It’s hip and now! Print it! Ship it!

JC: Don’t QUESTION it, just DO it. We’re in the Internet age! By now the Times has already posted three stories on their blogs and out on the rest of the Internet, there are thousands of new, fresh stories! How can we be with-it with you lolly gagging in your old ways?! HOP TO!
—

John Fontana December 15, 2008 satire, Tampa Tribune interweb, Personal Comments Off on A Day in the Life at the Tampa Tribune

Yeah, it’s not a science but… am I the only person who ends up reading their horoscope some days (or more days than not) and feeling like they are talking about someone else entirely and the horoscope forecast doesn’t apply to you at all?

Coming not quite soon

Riviera Plaza Publix opened at the corner of Alderman Road and US 19 before the Holiday season came out in full force. Sunset Point and Belcher Road Publix in Clearwater opened on the same day. The latter of the two stores was a former Jewel Osco location, that later became an Albertsons.

I happened to check that store out last week while in the area and, while I thought they wasted a ton of space and hadn’t put everything together in the best way possible (which is what one would expect from Publix), I thought it was nice. It was nostalgic in fact, because of how much it resembled the Tampa Road/East Lake Road Albertsons location to a T.

This made me curious to see how things were progressing at Boot Ranch and the conversion between Albertsons and Publix.

What I was left wondering was, what conversion? 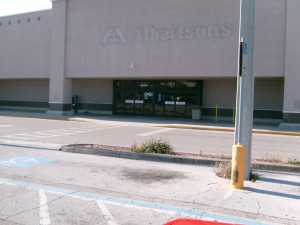 The ghost of the old sign for Albertsons as still prominent when I looked at the retail space from a distance… The parking lot directly in front of the store was void, of course. All the retail shoppers focused on CVS or Target in the northern part of Shoppes At Boot Ranch. To the south, it was also busy with people coming and going from Blockbuster Video, Subway or the other boutique restaurants in the plaza. 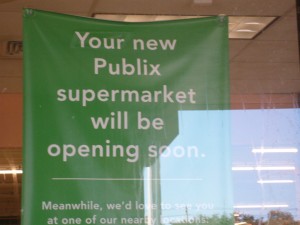 While the promise was there that Publix would be taking over 400 East Lake Road… But from the looks of things, no one had messed with the building for quite a while besides putting up the sign behind the glass. The glass doorways at the right and center entrances were strewn with cobwebs and the disgusting things that got caught in them. Plenty of Albertson’s laminates were still covering the doors and windows… Including the bold white-faced “OPEN” sign that contradicted the truth: this location hadn’t been open in months and wouldn’t be for some time to come.

I wondered from the start if Publix was simply going to renovate the location or perhaps tear down the front and interior of the building and start from scratch? Of course, there is also the negotiations with the owner of the Shoppes at Boot Ranch plaza if they wanted to make even simple changes to the structure (read: a paint job) or even reconfiguring the parking lot for better traffic flow. All that could be a drag on things…

Oh, and there is that little issue with the economy, right?

But peering into the windows and seeing the proverbial ghost of a supermarket, I wonder what is the deal? No painting had taken place, no demolition. No obvious signs of re-wiring or electrical work. The store simply sits in silence as the world bustles on around it.

Yeah, it might be strange to take a keen interest like this in a forthcoming supermarket, but color me curious. I wanna’ know what’s next.

John Fontana December 1, 2008 albertsons, albertsons supermarkets, Albertsons to Publix, publix supermarkets, shoppes at boot ranch Personal, Tampa Bay Comments Off on Coming not quite soon
C'mon.. Follow me. Like me.