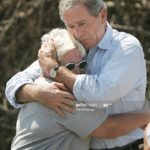 “Brownie, you’re doing a heck of a job.”

George W. Bush was on the ground in the gulf coast region struck by Hurricane Katrina in 2005 and his christening remark toward then-Federal Emergency Management Administration Director Michael Brown became a stigma on Bush as FEMA and Brown specifically, was criticized for their handling of the situation. That’s the political memory from Katrina that stands out, “Heck of a job, Brownie.”

Yet here in 2020, with the coronavirus unleashing hell on these United States and the world over, the focus on George W. Bush’s albatross changes for me. The 43rd President was on the frontline of hardships and witnessing things for himself. That Brown remark was an attempt at a morale boost (that ultimately failed; Brown resigned). Bush was involved.

Go further back to the attacks of 9/11. While a critic or a comedian (I was the former; I oft try to be the latter) focuses on Bush’s facial expression as he was told by an advisor that the nation was under attack, one of the more powerful images that were taken was of Bush on Air Force One, seeing the destruction upon Manhattan Island and the city of Nee York. Dubya would be on the ground time and time again in the days and weeks that followed. It was a first-hand experience in a city in recovery. That may or may not have influenced domestic choices and actions. Wall Street ane business relations also likely have influenced those visits hut that’s the cynic in me talking.

My point can likely be elaborated for Bush as well as added to with other Presidential direct-involvement with people and places who were suffering. These experiences also lead to changes or actions taken by the government to aid those in need in one fashion or another.

In short, they led.

Criticize an action, choice, or ideological differences, but Presidents – Barack Obama, Bush, Bill Clinton, George H. W. Bush, Ronald Reagan, and so on. – led, They learned first-hand as they socialized with the ailing, the stricken, the grieving, the mourning, the survivors. They took part in life and reacted with the voice and powers they controlled.

Have you seen that from Donald Trump in this situation or those prior? The man who demands the United States resume normal business and social operations in full by Easter is more renowned for spending time at his own resort facilities than visiting hospitals or speaking directly with doctors and nurses on the front-lines.

Donald Trump has a reputation of locking-in on a conclusion no matter what Pair this with the social-disconnect toward general Americans that he seems to flaunt all-too-often in his remarks and actions, then mix it with the intelligent perception that a President shouldn’t be put in a risky position. That’s not just a recipe for disaster, it’s been in the oven and baking the past three years!

“My way alone” is not leadership, not is concluding facts from you4 limited perspective.

This is a disaster that’s putting the United States collectively in disarray and turmoil and leadership is absent. The figure who is supposed to embody the role of leader turned away from the role as he was warned about such a threat. The threat Donald Trump focused squarely on at the times COVID-19 warning was told to him, was keeping the role of President.

Impeachment and self-esteem/self-image was more important than responsibility. This has played out over and over and over again. People are dying and it’s partly because of that me-first mentality.

Americans are dying, and the United States is operating in a twisted fashion or r like a chicken with its head cut off, take your pick. There is no leadership, there is a man in charge who demands loyalty and denies as much to the nation he is supposed to guide. His social concerns lay with the financial elite, not with Joe or Jane Average.

For the record, Trump was on the ground in Puerto Rico after Hurricane Maria ravaged the island. He made his own “heck or a job, Brownie” statement through the action of tossing paper towels to citizens of the would-be 51st state.