I’m going to a Japanese Steakhouse and Sushi bar tomorrow. I’ve never done Japanese meals — Sushi or Japanese prepared entries. That being said, I could use some advice on what to try or what to avoid.

I’d like to get through this without gagging, or without throwing up and looking like a fool (not that I can avoid it) too badly… So please comment away for, say, the next 16 hours…

It's a Horrible Life

Ten years gone; the life and times of a late-deaf adult

As I said in October, I had graduated from High School that year, forgotten in a huge senior class at East Lake High. There was one quality I had, though, that stuck out which people may remember me by — my hearing was shit.

After graduating in June of that year – with about 25 percent or less of my original hearing, I basically did nothing. I was reached out to by no one and didn’t attempt it much myself because I was the wall-flower… I couldn’t hold a conversation with thanks to not being able to understand what people were saying (even with the help of a hearing aid). And at age 18? Who’s going to put up with that?

I sank into depression and my health deteriorated. This hearing situation had already led to my decision not to attend Flagler College in St. Augustine (where I had been accepted the previous spring) and now I was isolated and alone in a world I couldn’t take part in. My balance became somewhat less dependable than tuning into MTV and seeing a music video playing. I wobbled and swayed all over the place and depended on leaning where and when I could, onto stable and solid things… Anything to keep me upright. 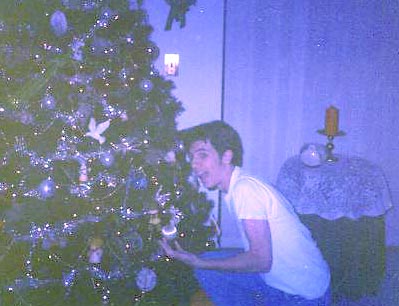 It was sometime in October of that year that I had an MRI performed on my head, and in a matter of days had a doctor tell me flat out that I could go to bed one night and not wake up the next morning. A 7 centimeter tumor effecting blood flow and cramping the brain will do that to you. Acoustic Neuroma is the scientific term to describe this, but the truth is it was the end of one life and the beginning of another…

It’s been ten years – not by choice, not by design, but by inevitability – that I’ve been deaf. Ten years since the natural hearing world escaped me and I was plunged into a more difficult version of society where one attempts to fit in while feeling like an outcast. Sure, I use a variation of the cochlear implant now (and have been for six years) and am doing quite well with it but I still haven’t turned a corner to make conversation easy to understand and take part in with strangers. I miss that the most…

It also doesn’t begin to describe the immediate aftermath aftermath — being trapped between worlds:  A deaf person in a hearing world, a hearing person in a deaf world where those around me refuse to adjust and demand my adjustment to them. Or being thrust into the paranoia filled bigotry of the deaf community where the hearing (or late deaf) were not welcome unless their commitment to the deaf life was total and utter.

I actually posted on Boltsmag! Twice today, in fact! Like, Ohmigod!

(why the snark? I’ve been avoiding Boltsmag for quite some time due various reasons expressed on the site tonight)

(Personal note — I haven’t written movie reviews on the site in quite a while with thanks to participating at times in a forum discussion at Skyscraperpage.com about movies that were last seen. The following is an elaborated version of the post I made on the forum thread)

I had one question every time I saw positive reviews this summer for Live Free or Die Hard. It’s a rather basic question that no one would really answer — or would give aloof answers to: Does this film live up to the Die Hard franchise standard? I’ve posed this question directly to professional movie critics without an answer

Die Hard: With a Vengeance elaborated the setting. It wasn’t a fixed location but all of New York. It still worked if you ask me because you had McClane, you had a semi-fixed setting on Manhattan Island (and around New York)… You had deep links to the first movie with references to the past, and yet this time it wasn’t John out of his element but thrust into things in his home. Oh, and John McTiernan directed (who filmed the original Die Hard). You can see the resemblance to the original with the cinematography employed, and McTiernan’s trademark directly-behind-the-actor light shots. Bruce Willis and Samuel L. Jackson played well off each other to boot. It’s not as highly regarded as the first but it beats the hell out of the second film.

Then you have this… this… this piece of shit that they pushed on moviegoers this summer.

The balance of good-guy, bad-guy (on screen time) is too even — that’s the first sign this doesn’t stand up. Less is more. It’s also hard to feel intimidated by “ready the video uplink”, “start the download”, etc…

Then you have McClane himself — it’s not the fact he’s older or his head is shaved: He’s a caricature of himself while playing a minimalist role. John McClane traditionally has been a rambling, sarcastic, insulting, sometimes arrogant, belligerent asshole. That isn’t the character portrayed on screen by Bruce Willis this time. Oh, sure, he’s got his moments but this isn’t McClane. This doesn’t feel like McClane. This felt like The Terminator — especially with all the shit McClane is put through, where he’s tossed around like a rag doll, falling several floors and bouncing off blunt objects and he still gets up and keeps going with seemingly no damage. That’s not John.

I mean, come on! The every-guy, mortality of John McClane was one of the things that made him great. Who can’t remember McClane running around barefoot in Nakatomi Tower? And what happened — he got shot, he got tons of glass put through his feet, and you saw him suffer that and doubted he’d survive. You had less of that in Die Hard 2, but you had more of it (except the jump-off-a-boat absurdity near the end) in With a Vengeance. This time? No — he’s got some cuts but he’s too much like the energizer bunny (which he mocks in With a Vengeance) to be hurt. He wheels around Matt Farrell (the Mac guy, Justin Long) and who do you think of but Ah-nold playing the Terminator, wheeling around Eddie Furlong in Terminator 2: Judgement Day (all of this helped along by that minimalist dialog that I talked about).

This might have been a great stand-alone movie but it sucks as part of one of the biggest action movie franchises in film history. It doesn’t fit. It’s odd that the original movie was conceived as an Arnold Schwarzenegger vehicle… Because Live Free or Die Hard plays exactly like one.

So the Writers Guild remains on strike and what do we have in the mean time but reruns of shows, YouTube clips of the writers showing solidarity (and humor) and heavy sighing as we miss late night mainstays that are not broadcasting right now — like the Daily Show.

I was watching Current TV again and an InfoMania segment came on… In this instance, they were going to actually show you about the famed Bridge to Nowhere that didn’t get built and the effects on the locals…

This is as good as any Rob Corddry (gone from TDS), Sam Bee, John Oliver or other past and present Daily Show contributor’s “investigative reporting”. Mocking, humerous, yet informative in it’s absurdity.

I saw this last week on Current before it aired on TV:

This brought back memories of sorts — cuz I had come across a ridiculous protest online in the past… I ended up commenting at Current about it:

This reminds me of the faux protests of Star Wars through the The Force is a tool of Satan web site. It landed on the web sometime before the Prequels started and has been a rallying point and a laughing point since.

I know that the over-consumerism in reality is a noose around our necks (suffocating us from truly enjoying the season or any holiday – because some SALE has been inspired by it! Or some greeting card, etc)… but a protest like this with an animate pastor/reverend who seems like a caricature of TV Evangelicals everywhere? Laughing point, not rallying point.

That’s just me though.

So what’s the hubub? Current contacted me yesterday and asked if they could read my comment on air. W00t! That will be (I THINK) 2:26 PM this afternoon.

I need to start paying heed to what I write

Back in July, I wrote a disgusted little message to myself:

Note to self: People make time for whatâ€™s important to them. Be they friends, ideas, events, etc. Proof of this is someoneâ€™s trip to (South Florida) while not being able to stop by while only a matter of blocks away during upteen days of (recent) past.

Why am I bringing all this stuff up? Because after an eye opening encounter I’ve gone right back to this square one. From the point where I have someone aware of what’s been obvious for a while to right back to what I used to deal with.

Closing from that post in July that I linked to and quoted at the top? It still applies: And so it goes, and so it stays…

John Fontana December 2, 2007 dating, The Life dating, Personal Comments Off on I need to start paying heed to what I write
C'mon.. Follow me. Like me.