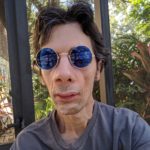 Here we are, deep into the NHL’s COVID-19 affected NHL playoffs! It’s sports-content when the world is generally forced to step back. The NHL’s system is proof of the step-back: Two host-cities for gameplay, no attendees, players/team personnel in a “bubble” to prebent catching the dreaded virus that has afflicted the globe.

The Tampa Bay Lightning are once again facing the Columbus Blue Jackets (last season’s series is a painful memory) and have taken two of three games played… Well, unofficially, it’s two of six games as the clubs had eight(!!!) periods of play in the series opener – regulation play and five overtimes.

In all the stories I just shallowly touched on with this, I haven’t said one damned thing in written content. The fact I’m writing this with a sudden personal turn is bad enough, but I was the original Tampa Bay Lightning blogger and this is my personal site so…

Why haven’t I said shit? That in itself is personal.

I have it upfront on Johnny Fonts that I have an issue with my hands which makes typing more difficult. I’ve also written on Raw Charge about my condition in general in a (failed) fundraising attempt. There’s stuff here too, but none of it speaks about the now. I haven’t gone public with this one – with friends on social media or on this site.

Oh, my silence has been influenced in part by the risk factor for the NHL that is at play with the virus. In May it made this writer turn up his nose at the playoff-system (so did the Lightning) but this isn’t the virus or politicking that has muted me…

Han Solo said it best in the Tatoonie desert in Return of the Jedi, “Instead of a big dark blur, I see a big light blur.” Subtract the daek and you have my silencing ailment, cornea scars that have rendered me blind.

It’s not total blindness or I wouldn’t be able to even attempt to write this. It is profound though and stops me from spending time reading coverage of the Bolts in articles or on social media. I struggle to read, I lose patience with thanks to pop-up elements on top og illegible text and give up. I also lack – and always have – the ability to keep up with the fast-fast pace of Twitter during games or events.

And then there’s watching games. I can’t. Or movies. Or news coverage. It’s blurred into discontent for me.

I pay attention to headlines I see; I follow news on Reddit specifically for that. I’m just not going deep in coverage as the die-hard sports fan that I am… And it sucks. It sucks that I am not invested in my passion covering the Lightning.

My general health affliction (paired with anxiety and insecurity issues) has always prevented me from much involvement with things. This vision issue continues that plight. The cornea scars are a result of eye-dryness which is a condition I’ve suffered for decades by way of tumors and necessary surgery. This explains why I’m always in sunglasses in photos: To hide the scats unsightliness.

To be visually impaired like this on top of my heating issues? It’s making me into a modern-day Helen Keller.

So, I’m not in the playoffs and coverage of the Coolest Game on Ice during this time of plight. I have been investing myself in music in a manner derived through my blogging days: Content management, promotion, and research. Oh, listening is a part of it too. It’s a step down from sports coverage as many independent musicians who are out there are only doing things as a hobby and I am and will remain irrelevant to them as I have no reputation in the industry. Having been part of Lightning coverage for so long made me relevant in hockey and Bolts coverage, especially seeing local media has never given the Bolts more focus and coverage which the franchise has earned through competitiveness.

So, uh, yeah… I’ve shut up. I suppose that makes some people happy. Perhaps this explains to my friends and colleagues why I’ve been scaled back on social media (though Facebook corporate/political issues have contributed, that’s one platform though). I media-share a lot and sometimes post messages. I don’t exactly enjoy making it seem like I want all focus on me by not reacting to others.

We]l see (pun intended) if things ever improve, but John Fontana is muted in many ways in the online world that has been his home for most of his life. And it pains him. Profoundly.