That was then, this is Sound

A Spectra-22 speech processor is a bulky piece of hardware, that’s all I can describe it as after eight years of toting one around.

For those who are unaware (and the general web-cosmos out there), I’m deaf. Stone deaf. I lost my hearing by way of genetic disorder requiring surgery at the age of 18. I was implanted with a version of Cochlear’s Nucleus-22 processor (known as the ABI) but didn’t go through with having it “turned on” (so to speak) until October of 2001.

…and if I knew how well I would hear with this implanted device, I would have gone through with it much sooner.

The thing is, with the implanted device, you have had to wear body-worn equipment to make it work. Stuff on your person. And for eight years, I’ve been wearing what essentially is a obsolete piece of equipment. The Spectra-22 was originally state-of-the-art in about 1989 – give or take a few years. While the entire concept of a late-deaf person hearing again is fantastic, technology sometimes does limit as much as it enables.  Like in my case.

I’ve been complaining to my audiologist in Los Angeles about how I cannot “turn the corner” with sound — while I hear and understand most everyday sounds, noises and what-have-you, I have an issue with understanding spoken word from people. I’m not all that great understanding generally day-to-day talking. Watching TV? I need closed captioning. Trying to chit-chat with family or friends? Harrowing experience where I have to do more speaking than attempting to listen. Group conversation? Fughettaboutit; there’s no friggin’ way I follow a conversation that is more than me and someone else.

Part of that is the limitation of the speech processor hardware. Part of that is a limitation of the implanted device in itself. Part of that is just me — after all, I started losing my hearing at around age 13 and conversation soon turned to blah-blah-blah unless I really focused. Calling it laziness wouldn’t be out of the question. In fact, part of me feels like that’s exactly what it is — laziness and lack of actual focusing on what I hear due to quality. Oh, I can listen and follow music just fine… Speech? Different story. Different complication.

One that I hope gets appended with a recent change.

In April I started having issues with my now-arcane Spectra-22. I shot off an email to my audiologist about the issues I was having and asked about replacing the device — I did have insurance on my equipment after all. But my doctor explained that the Spectra had been discontinued as it was now technologically obsolete.

“No… Really?” I muttered with thick sarcasm from where I was sitting. The hearing-noose that the Spectra is/was (and I’m not ungrateful, I’d gladly wear that piece of equipment instead of being deaf) was clearly dated with the technological innovations that has showng up elsewhere in society. Of course, cell phone technology or computing technology isn’t quite comparable to a human prosthetic — is it? From processors onboard your iPhone or Blackberry to different innovations with software that had certainly taken place since the Spectra-22 hardware was introduced, I have been pretty certain that “turning the corner” with understanding speech was only a speech processor upgrade away.

A couple of weeks ago I ventured to Los Angeles on my yearly sojourn to see my audiologist at the House Ear Institute. This time around, instead of using arcane software tied to the arcane speech-processor I was wearing in my attendance at the appointment, we were going to be replacing that hardware with the newer Freedom speech processor from Cochlear. 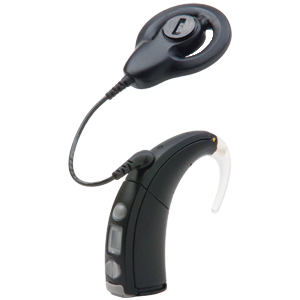 One can see from the processor picture alone that there is a lot less hardware involved in the unit. Instead of having to wear a body-pack to handle all the technological mumbo-jumbo, it’s all contained within the first 1/3rd of the prosthetic. The rest? Audio control and batteries.

It’s taken me a few days to adjust to sound as it’s relayed with the device – and when I mean sound I mean general hearing. You have different aspects that you can tune with this device (the microphone volume and the microphone sensitivity) that both play into what you are able to hear. On the Spectra, you only had the option of turning up or down the sensitivity of the microphone on the unit. That led to a lot of noise clutter even as you used a second setting to reduce background noise. It was part of why speech was only blah-blah-blah.Â  Though I must admit that i am yet to master the improvements that I can have with a strong sensitivity without a loud volume and what not.

Practice will make perfect, however.

Yet I had an event, just listening to sound like I normally would, that encouraged me. Actually two. One was listening to TV in my hotel room and having to turn off closed-captions due to them distracting me as I tried to listen to a talk show on TV. Imagine that?Â  Going through years upon years of needing the crutch that is closed captions and then having to turn them off because they were distracting you. Mind you, I was not picking up the full conversation that was going on but I was understanding key words being used instead of hearing the throw-away words like and, then, if, to, but that give no perception of what is going on in the conversation. Instead, I was making out key words that gave me a gist of what was being said. Add the tone of a speakers voice and their body language and you aren’t on the outside, looking in so much. You’re at the doorway and you’re eavesdropping. That’s what it felt like.

The other little ephinay I experienced was simply listenign to my iPod. Yes, it’s odd that someone who is clinically deaf has an iPod to begin with… let alone enjoys music at all but here I am. Listening to music tended to be quite like listening to AM radio with outstanding reception, or FM radio for that matter.Â  Could have been better but it was great all unto itself.

And yet I listened to the typical stuff on my MP3 player — The Doors, R.E.M., Counting Crows, Aerosmith, The Beatles, what not…  the quality was closer to CD quality than I’d ever had before. CD Quality!  CD Quality!

That’s encouraging! More than encouraging. Sure, everything isn’t going to be perfect any time soon, but I look forward to trying to get there.

Technology can indeed be grand.

3 Comments to That was then, this is Sound