While I’ve already kvetched about the prequel reboot of the Die Hard franchise, also having been contacted by an actor who wants to take up the role of Mr. Officer John McClane or the New York City Police Department (I miss you, Alan Rickman,) there’s a thought in my head that’s fitting for the franchise. It’s fitting with many film franchises as long as it’s not a forced undertaking..

Don’t reboot Die Hard, spin it off to another lead character.

In October 2017 I wrote an immediate reaction to the bare-bone synopsis of the next Die Hard film. It’s not that I’m not a fan of Die Hard or Bruce Willis/John McClane, it’s more about the fact that I’ve seen the franchise move away from the wrong-place-wrong-time, fixed location presentation. By way of it, the franchise was getting away from John McClane and what made the character a draw in the original film and early sequels.

Here it is, a year and a half later and I’ve been wondering casually what the deal is with the film tentatively titled (at the time of my original write-up) Die Hard: Year One. The bare-bones synopsis that came out with the news of the sixth film said that the movie would be a prequel/sequel hybrid that Willis would be involved in. Yet casting news, filming news, it all slipped by without actually being news… or so I thought because I haven’t heard or seen shit.

In some ways, it’s understandable that the movie hasn’t moved forward – those “some ways” being the merger of 21st Century Fox (20th Century Fox) and Disney. Unlike when Walt Disney Pictures took control of the Star Wars franchise, there’s a hell of a lot more to organize and oversee with the acquisition of the entire 21st Century Fox motion picture studio (and more holdings of various sorts). Moving forward quickly with the Die Hard movie (that’s to be helmed by Len Wiseman and titled McClane) may have been slowed by the sale logistics or other various things, I wouldn’t know for sure.

I was updated a touch by a surprise email a few days ago. This blog isn’t one that tends to get PR email or press contacts (whereas my days writing for Raw Charge has added me to alot of hockey-related and Tampa Bay-area PR stuff). The contact wasn’t from Fox, not Disney, or a third-party agency or talent firm, but from a would-be Officer John McClane. 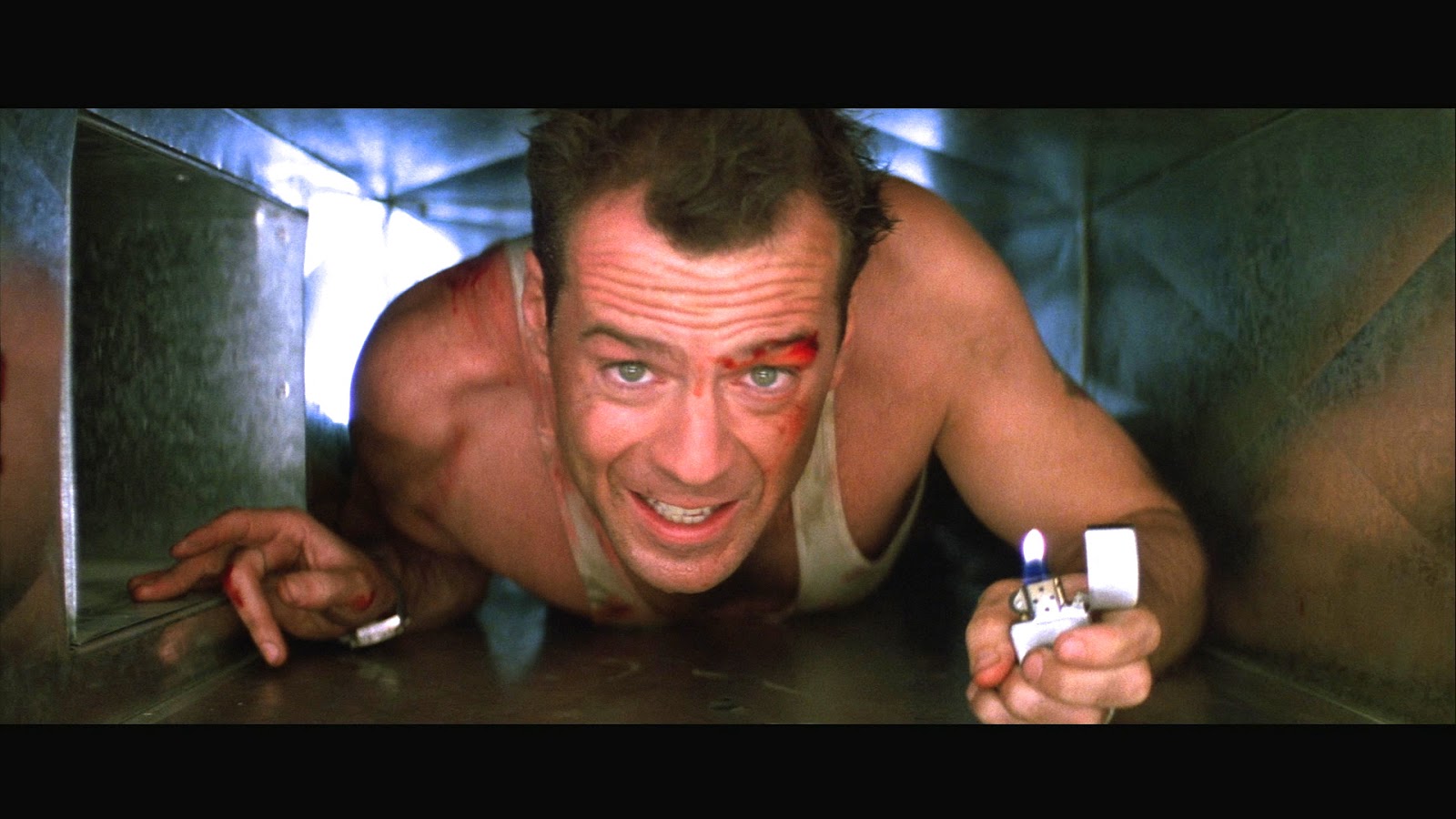 A reaction to the basic premise of “Die Hard: Year One”

The mused about title is Die Hard: Year One and already the sixth movie of the Die Hard franchise is a failure. Yes, Bruce Willis is set to return to the franchise as John McClane, but with this in a prequel/back-story action movie, it counters the entire premise of the original film. END_OF_DOCUMENT_TOKEN_TO_BE_REPLACED

Did you ever browse around in a comic book store as a kid and find the Marvel “What If…?” comic books? Books that were about renown comic book characters but “What if…?” something about them was different: Part of their backstory, part of their powers, or results of one thing or another that has happened in their comic books…

I won’t go into the geekdom of the what-if concept and the different stories that were based on this. Let’s just say it as a venerable butterfly effect — the flapping of wings on a different continent were part of the reason why a typhoon formed in the Pacific Ocean. One small happening causes a huge domino effect and results in something seemingly indirect and different to happen. That kind of thing.

Today I came across (by way of Dave Lowe) a joke observation from the Back To The Future saga and the original movie. It was composed as a (profane) letter from Doc Brown to Marty McFly regarding one of Marty’s choices on the eve of November 12th, 1955. It’s funny as hell but it leaves you wondering just how different the story would have turned out if Marty McFly had done things differently?

So I got me a “What if…?” like this regarding a movie that I love. It’s (the film’s) basis is pretty simple and was the framework for plenty of different action movies from the late 1980’s through the 1990’s.

The movie in this case is Die Hard. END_OF_DOCUMENT_TOKEN_TO_BE_REPLACED

(Personal note — I haven’t written movie reviews on the site in quite a while with thanks to participating at times in a forum discussion at Skyscraperpage.com about movies that were last seen. The following is an elaborated version of the post I made on the forum thread)

I had one question every time I saw positive reviews this summer for Live Free or Die Hard. It’s a rather basic question that no one would really answer — or would give aloof answers to: Does this film live up to the Die Hard franchise standard? I’ve posed this question directly to professional movie critics without an answer

Die Hard: With a Vengeance elaborated the setting. It wasn’t a fixed location but all of New York. It still worked if you ask me because you had McClane, you had a semi-fixed setting on Manhattan Island (and around New York)… You had deep links to the first movie with references to the past, and yet this time it wasn’t John out of his element but thrust into things in his home. Oh, and John McTiernan directed (who filmed the original Die Hard). You can see the resemblance to the original with the cinematography employed, and McTiernan’s trademark directly-behind-the-actor light shots. Bruce Willis and Samuel L. Jackson played well off each other to boot. It’s not as highly regarded as the first but it beats the hell out of the second film.

Then you have this… this… this piece of shit that they pushed on moviegoers this summer.

The balance of good-guy, bad-guy (on screen time) is too even — that’s the first sign this doesn’t stand up. Less is more. It’s also hard to feel intimidated by “ready the video uplink”, “start the download”, etc…

Then you have McClane himself — it’s not the fact he’s older or his head is shaved: He’s a caricature of himself while playing a minimalist role. John McClane traditionally has been a rambling, sarcastic, insulting, sometimes arrogant, belligerent asshole. That isn’t the character portrayed on screen by Bruce Willis this time. Oh, sure, he’s got his moments but this isn’t McClane. This doesn’t feel like McClane. This felt like The Terminator — especially with all the shit McClane is put through, where he’s tossed around like a rag doll, falling several floors and bouncing off blunt objects and he still gets up and keeps going with seemingly no damage. That’s not John.

I mean, come on! The every-guy, mortality of John McClane was one of the things that made him great. Who can’t remember McClane running around barefoot in Nakatomi Tower? And what happened — he got shot, he got tons of glass put through his feet, and you saw him suffer that and doubted he’d survive. You had less of that in Die Hard 2, but you had more of it (except the jump-off-a-boat absurdity near the end) in With a Vengeance. This time? No — he’s got some cuts but he’s too much like the energizer bunny (which he mocks in With a Vengeance) to be hurt. He wheels around Matt Farrell (the Mac guy, Justin Long) and who do you think of but Ah-nold playing the Terminator, wheeling around Eddie Furlong in Terminator 2: Judgement Day (all of this helped along by that minimalist dialog that I talked about).

This might have been a great stand-alone movie but it sucks as part of one of the biggest action movie franchises in film history. It doesn’t fit. It’s odd that the original movie was conceived as an Arnold Schwarzenegger vehicle… Because Live Free or Die Hard plays exactly like one.