A month ago, a little further back perhaps, I saw a post on Reddit pointing to a new web site that vowed it would predict the movie you were thinking of in 30 questions or so. Filmillion piqued my curiosity, so I gave it a whirl (more than once) and was left frustrated and disappointed. That’s not because of how well the site performed but by how flawed its questions (and movie guesses tend to be.

If there have been any database improvement or other site modifications to combat flaws isn’t something known by me. What is known is that I gave the site another run for the sake of writing this article. If it leads you to wanting to try it yourself remains to be seen, but here’s what I dealt with and the outcome.

I’m a fan of the film The Hunt for Red October, which was the first Tom Clancy novel to become a film.

All right, thinking about the 1990 film, there are some basic rules you’re told to adhere to before starting the Q and A on Filmillion:

Simple enough. Let’s see how things go. While every question asked will be listed here, not all will be commented on. Some will draw commentary because it’s debatable in one way or another (and not necessarily toward the film itself). In total, Filmillion may ask 50 questions before giving up. Every time I’ve played has gone to 50, and every time the site has been shooting wildly with its guesses (usually two films will be guessed at most and sometimes three).

With that being all said, Filmillion makes its first attempt at a guess at question #29:

The Magnificent Seven from 1960? Uh, no. Again, deduction is elusive outright. The film was not black-and-white! Mind you, a lot of what I said kept this flick open for possible work (I think…?) but the black-and-white aspect kills it off. Heck, even if this was the 2016 version, it’s been closed off by another answer already (was this film made in the 21st century).

So, after telling Filmillion no, the game resumes:

With only 5 questions left from Filmillion, the program made a second guess and dropped a bombshell on me: 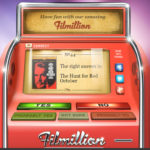 I’ve used the site so many times with several films, including The Hunt for Red October. This is the first time anything has been successfully guessed. And that came by way of chance. I’ve pointed out all too-many flaws in questioning and how opinion can sway answers differently. I’m still taken aback with this.

The repetition of some of the questions (sci-if) has struck before. One movie I had in mind was a musical and while questions led (late, again) in the direction of a music driven film, Filmillion latched on to The Blues Brothers, asking repeatedly if Dan Aykroyd was in the film before (still) asking if the film was Blues Brothers (in the very last question).

I don’t know how wide a range has been employed by those who have tried Filmillion; I might be an old fart while use is dominated by teens and 20-somethings. Perhaps there is a wider degree of use? Never the less, there are warts to be dealt with and certain answers, swayed by personal perspective, that’ll gum things up. It’s worth taking a shot at Filmillion for a few minutes of your time and entertainment (or eye rolling frustration and disappointment).